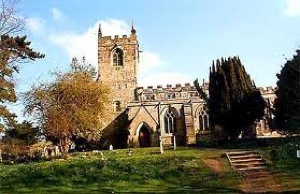 The area around Aston and Weston has probably been inhabited from around the 6thcentury. Bronze age burial sites and iron age pottery have been excavated around the area.  In the 11th century the Manor of Weston was an important route for travellers because of the crossing at, Weston Cliff, over the River Trent.

At the time of the Doomsday Book (1086) the Manor of Weston (West Farm), of which Aston (East Farm) was a part, belonged to King William. The two Doomsday churches of the Royal Manor were both located on the site of the present day churches of Aston and Weston. Both still have Norman remains as part of the present buildings. King William gave the Manor of Weston to Hugh d’Avranches who later became Earl of Chester. In turn he gifted the Manor to the monastery of St Werburghs in Chester.

In the 16th century the Abbey of St Werburghs, was the largest landowner in the Manor of Weston.  At the dissolution of the monasteries these lands fell into the hands of King Henry V111, who sold them to his secretary a William Paget. They were inherited by his son Charles Paget, a fervent Catholic who became involved in religious politics. While plotting against Elizabeth l he was also giving information to her ministers. He was found guilty of treason and had his lands sequestered for his involvement in the Babington plot to release Mary Queen of Scots. He had escaped death by living in France. The Manor of Weston was restored to him by James l in 1603 and eventually inherited by his niece who was married to Anthony Roper. It is believed that the construction of Weston Hall (Coopers) started around this time. The Ropers sold the Hall in 1649 and it was never completed. The Hall was bought by Robert Holden who passed it to his son Rev Charles Edward Holden.

In 1648 Robert Holden paid £400 for property in Aston. His descendants lived in the village for the next 250 years and were responsible for the building of Aston Hall. Family members were rectors of Aston Church for 170 years.