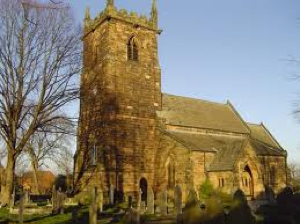 The origins of the village pre-date the Norman Conquest and settlement of the area. The name is thought to derive from ‘The farm of Aethelwald‘ and is documented in the will of the Saxon thane Wulfric, who left the estate to his nephew Wulfheah in 1002. It was the latter’s grandson, Toki who held the land in 1066, but by 1086 and the publication the Domesday Survey it was in the hands of the Norman Knight, Geoffrey Alselin. Geoffrey held the villages of Ambaston, Thulston and Elvaston which combined with Alvaston comprised a, not insignificant, single estate or manor. Alvaston village church has its origins in the Saxon period; as evidenced by the discovery of a Saxon coffin-lid during the restoration of the medieval church of Saint Michael’s in 1856 by Mr Henry Isaac Stevens. Alvaston manor subsequently passed into the hands of the Abbots of Dale, although Saint Michael’s parish and church was under the patrimony of the Abbots of Darley.

At the dissolution of the monasteries during the reign of King Henry VIII, the Alvaston manor along with Dale Abbey passed into the hands of the Sacheverell family, whilst the Abbey at Darley and its lands in Alvaston passed to the de Allestrey family; they subsequently acquired the Sacheverell’s interests in Alvaston and the patronage of the new Borough in the sixteenth century. It was the de Allestry family who held the ‘living’ of Saint Michael’s church and were thus responsible for the appointment of its Rector. The de Allestrey’s built Alvaston Hall circa 1620, but after the demise of the senior branch of the family in 1741 sold the Hall and most of its land to an up-and-coming family, the Borough’s.

During the nineteenth century there was a considerable amount of expansion out of the original confines of the village, and some of the Regency style villas of the 1820′s can still be seen off Elvaston Lane and Church Street. The Poplars was owned from the mid-1850′s until 1952 by the Smith family, renowned coachbuilders in Derby. The coat-of-arms of Herbert Dagley Smith Esquire a lion rampant is still to be seen of the side of the house. Nunsfield House was built in 1828 by a Mr Holbrook, after whom the street in Boulton is named. The house was owned by Mr C.H. Soresby Esquire in the 1900′s. Alvaston Fields, now a nursing home, was built by Mr J.T. Borough the heir to the de Allestrey family after the demolition of Alvaston Hall.

Crewton was separated off from Alvaston in the early nineteenth century and in 1854 Alvaston was merged with Boulton to form one single civil parish. Saint Michael and All Angels Church was separated from Saint Mary’s, Boulton Lane in 1865 and constituted as a separate parish (link to St Michael’s website). Alvaston contains both a Baptist and Methodist Chapel (www.derbymethodists.org.uk/info/alvaston). [Bibliography: Craven, M, ‘Illustrated History of Derby’, Breedon, 1988; Craven, M & Stanley, M, ‘The Derbyshire Country House’, Vol.II, Matlock 1984.]