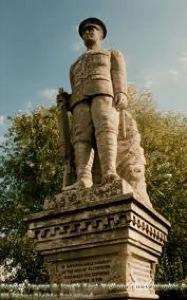 This area of the parish owes its beginnings to a certain Mr Isaac Allen who purchased several acres of land in the 1870′s either side of the highway between Derby and Swarkestone on the outskirts of Alvaston. This local philanthropist and entrepreneur constructed five streets of artisan’s houses between 1878 and 1895 and for the inhabitant’s recreation the Crown Hotel in 1891; at the same time, a school was opened under the supervision of the Alvaston and Boulton School Board. The ‘Allenton Village’ was expanded during the 1920′s with municipal housing. Originally confined north of the A514 by the canal, it subsequently spread across it into Boulton. Located within the area is, a Secondary School and a Wesleyan Chapel. [Bibliography: Craven, M ‘Illustrated History of Derbyshire’, Breedon, Derby 1988.]